Vote for your favorite Auggie nominations through October 7 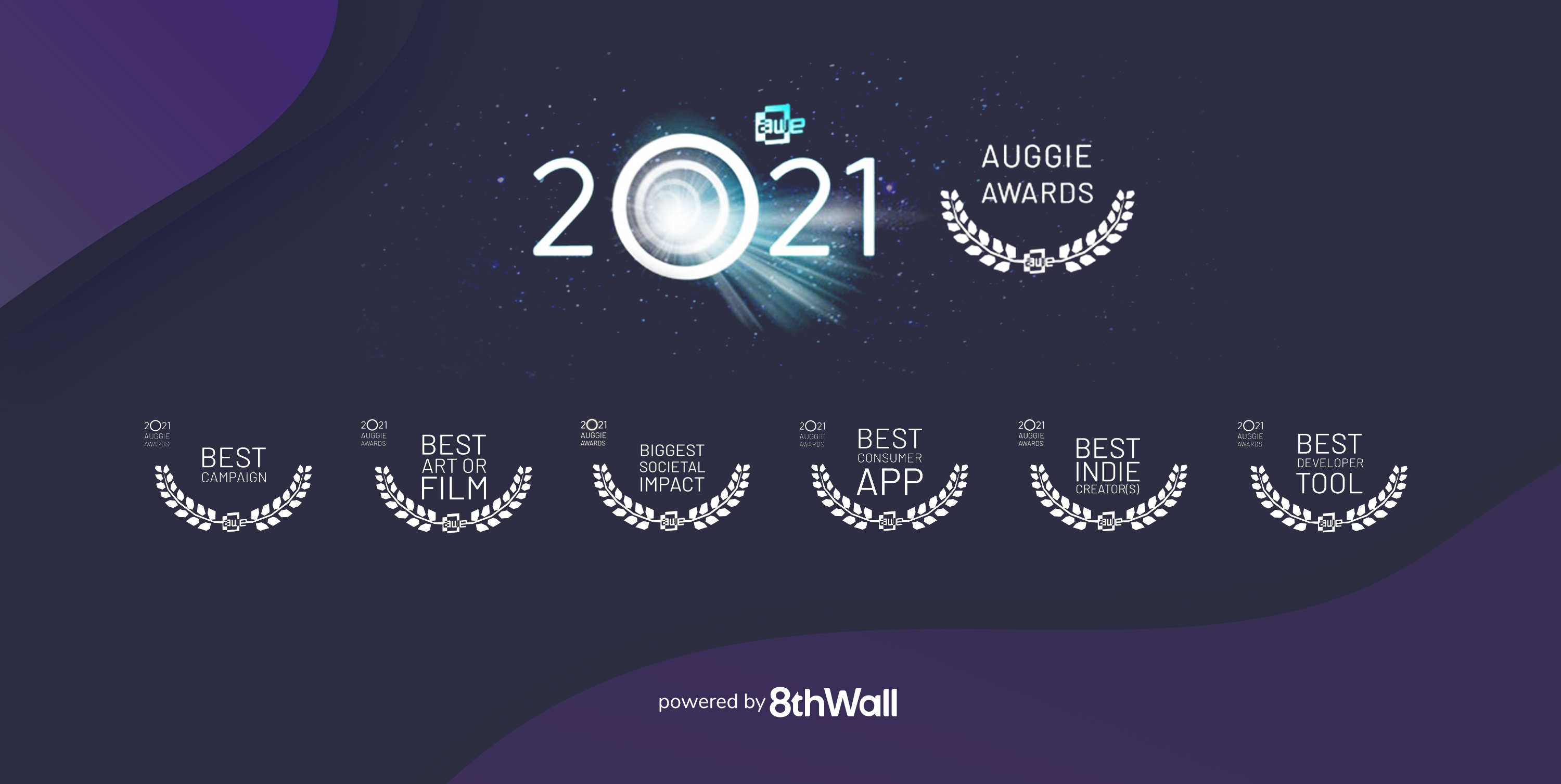 The Auggie Awards are back this year and 8th Wall WebAR is making a huge splash with 23 nominations across 6 categories.

The annual Auggie Awards have been the most recognized AR & VR industry awards in the world since 2010. Now in its 12th year, the Auggies continue to showcase the best of the best in augmented, virtual and mixed reality. Winners will be presented with a prestigious Auggie Award at the Auggie Awards Ceremony, taking place this year on November 10th at the AWE USA 2021 event in Santa Clara, California which 8th Wall is a proud silver sponsor.

With AWE 2021 right around the corner, we’d like to recognize the WebAR projects from our talented partners that have been nominated for an Auggie Award. 8th Wall powered experiences make up 22 Auggie Award nominations across 5 categories including Best Campaign, Best Art or Film, Best Consumer App, Best Indie Creator, Best Societal Impact plus 8th Wall is nominated for Best Developer Tool.

Vote for your favorites to help them take home an Auggie! Public Voting is open now until October 7. 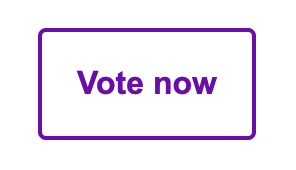 To promote the launch of the upcoming sci-fi blockbuster Dune, Warner Bros. Pictures and Legendary created an innovative, cross-platform avatar experience. Users could create an avatar from a selfie or customise their own entirely from scratch, choosing from a variety of custom designed Dune character outfits. Once created, the custom avatar can be viewed in WebAR or downloaded and used cross-platform in hundreds of compatible games and environments.

To promote a brand new sports competition for ECB’s 100-ball cricket competition, The Hundred launched an industry-first WebAR cricket game that featured never before seen use of WebAR technology. The WebAR game included features like team-selection and character customization as well as realistic physics simulation, haptic vibration feedback, and Spatial Analytics which allowed for granular analysis of user interactions in 3D space.

Blazing a trail together, BBH, Dimension, and bully! brought the world's first private AR concert on a burger to life for Burger King and Tinie. The activation, featuring a Tiny Tinie performing his song Whoppa on a Whopper, was spawned from QR code stickers placed on burgers at locations across the UK, Columbia, and Peru.

To announce the new LEGO City road plates, Hoopla Digital worked with Lego to create an augmented reality experience that enables users to design their own city layout before applying buildings & seeing it come to life. With interactive interconnected building animations & an ongoing live traffic system.

Rock Paper Reality developed Saatchi Art’s all-new “View in My Room” WebAR feature that lets you view over 1.4 million works of art in your home before buying online--the largest deployment of WebAR for e-commerce. Each art piece is dynamically scaled based on the artwork’s metadata and deployed into AR with the approximate real-world dimensions of the physical artwork.

Rock Paper Reality joined forces with Microsoft’s volumetric capture team to create a hologram of Siduri’s founder, Adam Lee. For the experience, RPR fused Adam’s hologram with photorealistic, 3D content fused with the physical wine bottle and made it easily accessible through WebAR.

19 Crimes Snoop Cali Red launched the first web-based experience within the Snoop 19 Crimes brand featuring Ask The Doggfather, an interactive experience that allows you to ask Snoop Dogg all your burning questions. Snoop will either appear seamlessly from the Cali Red bottle or, if you do not have a bottle, will appear true to scale within the world around you.

Trigger worked with Verizon, LiveNation, and 8th Wall to build an exclusive concert experience which was featured at the end of Chairman and CEO Hans Vestberg’s keynote address at CES 2021. Whether watching the presentation live or in a pre-recorded broadcast, viewers are able to launch the web AR experience via QR code, which is displayed prominently onscreen. They then place the portal in their environment and tap where indicated to be virtually transported to a stage with the Grammy Award-winning band, Black Pumas.

As a COVID-safe alternative to the annual Macy’s Thanksgiving Day Parade, Trigger worked with Verizon to create a webAR 360º portal for the event. The experience was complementary to the television broadcast, offering two live camera options for viewers on the East Coast and a pre-recorded feed for viewers on the West Coast. To launch the experience, users place the portal in their environment then when they approach the virtual threshold, they are transported to a curbside 360º view of the Parade in New York.

Together with the TAC, Unbnd created an interactive webAR-enabled gallery experience that showcased seven seemingly ordinary items from seven lives that were forever changed by road injuries. Seven plinths housing the personal artifacts were spawned in front of the user in AR allowing users to explore at their own pace, like a museum. Spatial audio narration guided the user around the plinths. Proximity and gaze-based navigation triggered content relevant to the user’s position eliminating touch-based navigation.

Since fans were not allowed in the stadium, the Titans wanted to create an experience that engaged both fans and Tennesseans with the team. To accomplish this, MVP Interactive collaborated with the Tennessee Titans to bring fans the first NFL mural to incorporate WebAR technology. The Titans-inspired 135’ x 26’ mural in downtown Nashville called “Tennessee Tough,” the team’s brand message for 2020 and beyond, was created by Nashville-local muralist MOBE. The experience drew inspiration from overcoming challenges, as the city of Nashville has experienced through the devastating March tornados, pandemic and social justice dialogue.

In an effort to shift the narrative around tequila, Patrón wanted an experience that made tequila THE go to spirit to gift for the holiday season. This led Rose Digital to create an AR experience that allowed users to create a custom gift wrap using photos, text, and stickers that transformed into a 360-degree augmented reality gift wrapping around their Patrón bottle.

As the fashion world had to adapt and move to a purely digital landscape due to COVID-19, ROSE worked with Khaite to bring its collections into the homes of its customers using augmented reality. To ensure accessibility, ROSE built two WebAR experiences that are deeply interactive, highlighting the unique details of KHAITE’s footwear and clothing designs in a way that offers endless creative freedom for the user. These experiences led to 4+ minute dwell times, an average of 16 looks viewed per user and a 400% increase in sales.

Real Estate - AR Quarantour from Unicorns and Unicorns on Vimeo.

Indie rock band Real Estate became the world’s first musicians to launch a WebAR concert. Dubbed “Quarantour,” the virtual performance was created to bring the live music experience directly to fans amongst worldwide shelter-in-place protocols due to COVID-19. Users could transform the self-isolated space of their choice into a venue they could walk around in, complete with all five band members, stage / light / sound rigs, witty banter, and even an encore.

To promote the sweepstakes for Pacifico Beer, CXR team employed the magic of WebXR. The first places a cooler in the user's space that pops open and fogs up the screen. Wiping the layer of frost reveals the sweepstakes signup. The other experience superimposes the user’s face on the body of a skateboarder. In this game, users steer down a path, avoiding potholes and collecting rings in order to enter the sweepstakes.

Modelo wanted to showcase their apparel partnership with a Chicago-based clothing brand and encourage users to enter their sweepstakes. To do this, CXR developed a cutting-edge campaign that included age validation, an in-browser AR experience with custom 3D models, and a sweepstakes entry form. The WebXR experience featured a holographic slider that cycles through the various pieces of apparel, from shorts to hoodies to bags. The user could go back and forth and see full, rotating views of each item.

Tiger on the Loose

Tiger on the Loose from Orb Amsterdam on Vimeo.

For its 50th year; International Film Festival Rotterdam launched Tiger on the Loose; a stunning AR project combining public space, film, art and technology. Large green structures were placed on 50 different locations in the city of Rotterdam. QR codes on these green spots guided visitors to a webAR experience. Short film clips of tigers from famous movies from the last 50 years were presented. This way 50 open-air pop-up cinemas were created all around the city of Rotterdam.

Rock Paper Reality developed Saatchi Art’s all-new “View in My Room” WebAR feature that lets you view over 1.4 million works of art in your home before buying online--the largest deployment of WebAR for e-commerce. Each art piece is dynamically scaled based on the artwork’s metadata and deployed into AR with the approximate real-world dimensions of the physical artwork.

Game: Store of the Future

Created for the retail giant, Game (owned by Massmart), the experience enabled customers to visualise a range of products in their own homes before completing the purchasing process online. Opening the app, users are placed in a mobile VR view positioning them in a virtual showroom, surrounded by digital products. Users select a product which then activates an AR view, allowing the user to easily place and visualise the selected product within their home. Purchases can then be made with the integrated website, allowing the product to easily be purchased and delivered to the home.

In partnership with the Texas Immersive Institute, The University of Texas at Austin sought to create intimate connections with digital-first families. Through 8th Wall’s WebAR, faculty and students reimagined the campus experience for a quarter of the budget typical of augmented reality campaigns of this scale. Consisting of 3 connected projects - Map Mailer, Tour, and Photobooth - audiences immerse themselves into the culture of UT Austin without ever leaving their circle of friends and family. The experience is now seen by nearly 70,000 people who visit UT Austin every year, consisting largely of prospective students.

Bye, bye balloons. Long live balloons! McDonald’s in Sweden are now replacing all balloons in their restaurants with digital balloons. With the AR experience in the McDonald’s app, their youngest guests can have more balloon fun than ever without a single balloon ending up as litter. A big little change for a more sustainable future.

Together with the TAC, Unbnd created an interactive webAR-enabled gallery experience that showcased seven seemingly ordinary items from seven lives that were forever changed by road injuries. Seven plinths housing the personal artifacts were spawned in front of the user in AR allowing users to explore at their own pace, like a museum. Spatial audio narration guided the user around the plinths. Proximity and gaze-based navigation triggered content relevant to the user’s position eliminating touch-based navigation.

…and we’re up for an award for Best Developer Tool!

Thanks for your support!  And best of luck to all the nominees up for an Auggie Award this year!